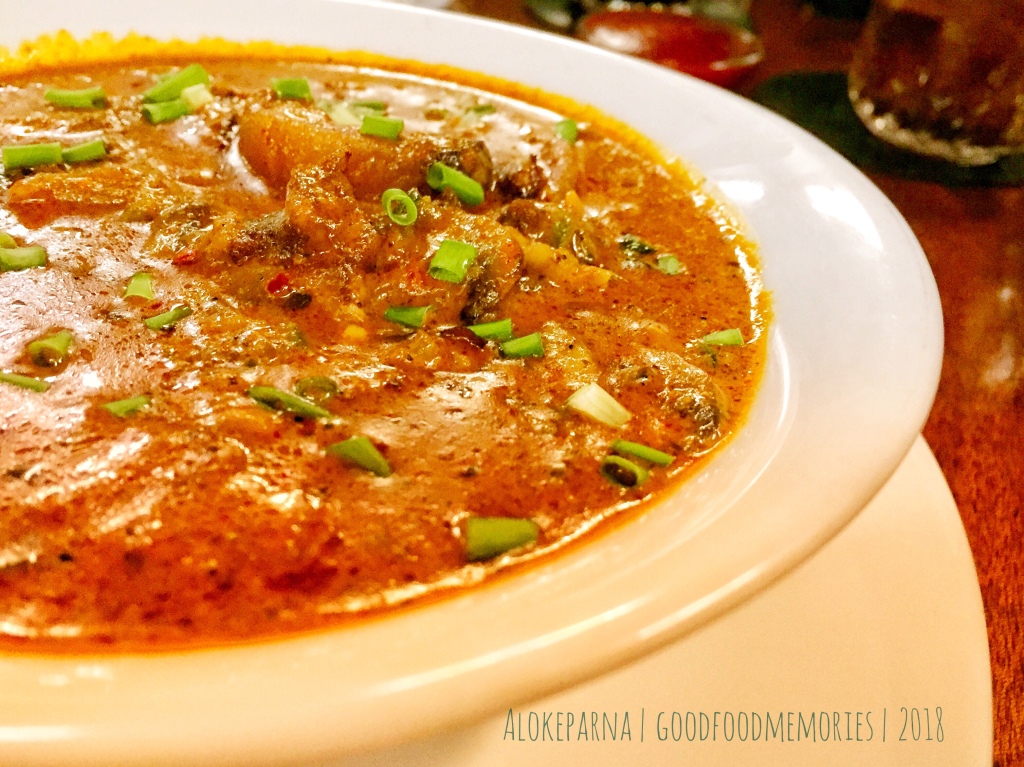 I had passed by Macazzo at least a few hundred times since its inception in September 2016, but never made it inside till a few weeks back. It was partly because of the lack of meat-loving company and partly because of the wrought iron furniture that I could see through the glass door. I do not regard wrought iron furniture as very ergonomic. Nevertheless, the good reviews I had been receiving from trusted food enthusiasts, had made me decide to visit the restaurant. The opportunity came all of a sudden one evening, when an adda at Macazzo was hurriedly planned.

The restaurant is a few houses away from Menoka Cinema, at the corner where Abdul Rasool Avenue merges with Southern Avenue. The bright red signage on the façade catches the eyes against monsoon-bathed greens all around.

It has two levels – ground floor and basement, connected from inside by a spiral iron staircase. The basement level was added in September 2017, just before the Pujas, to accommodate the rising footfalls.

The upper level is more like a casual café and I saw many youngsters having animated conversations on life-altering topics such as selfie hacks or what’s breaking on YouTube :p

The rotating staircase, however, turned the first impression 360 degrees. The lower level had a very tastefully done retro rock café looks. Wood panelled walls and wooden furniture (some) with dark varnish pleased my soul to no end. I casually asked Bitan who did the interiors and he replied it was partly him and partly his partner. At that instant, my doubts faded. A man who can execute creativity in an aesthetic manner can only make great food. 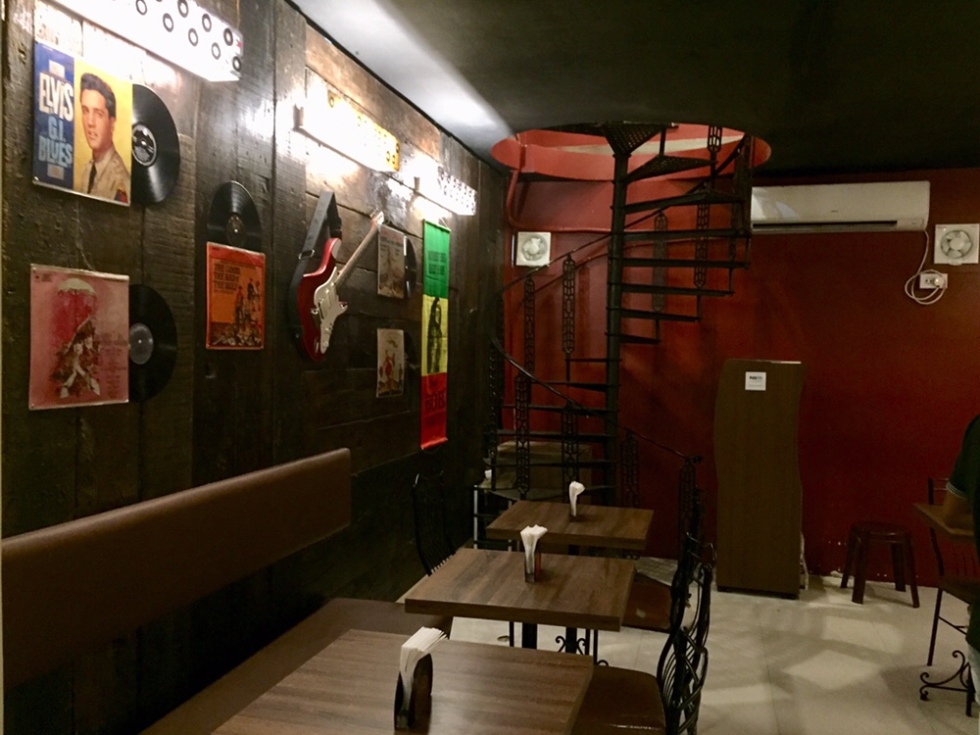 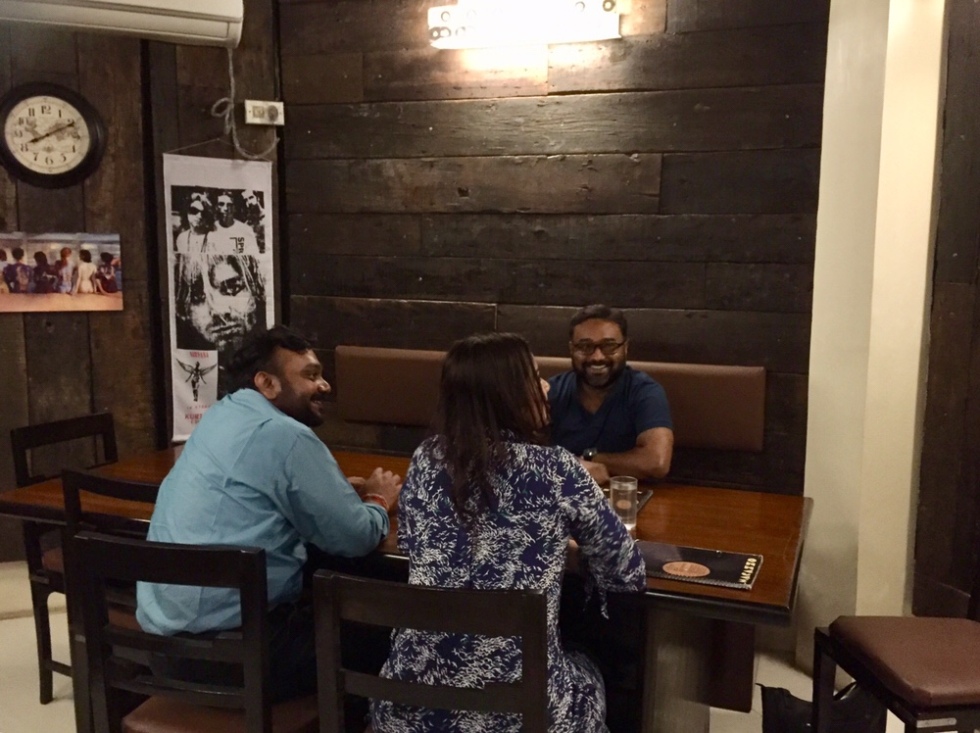 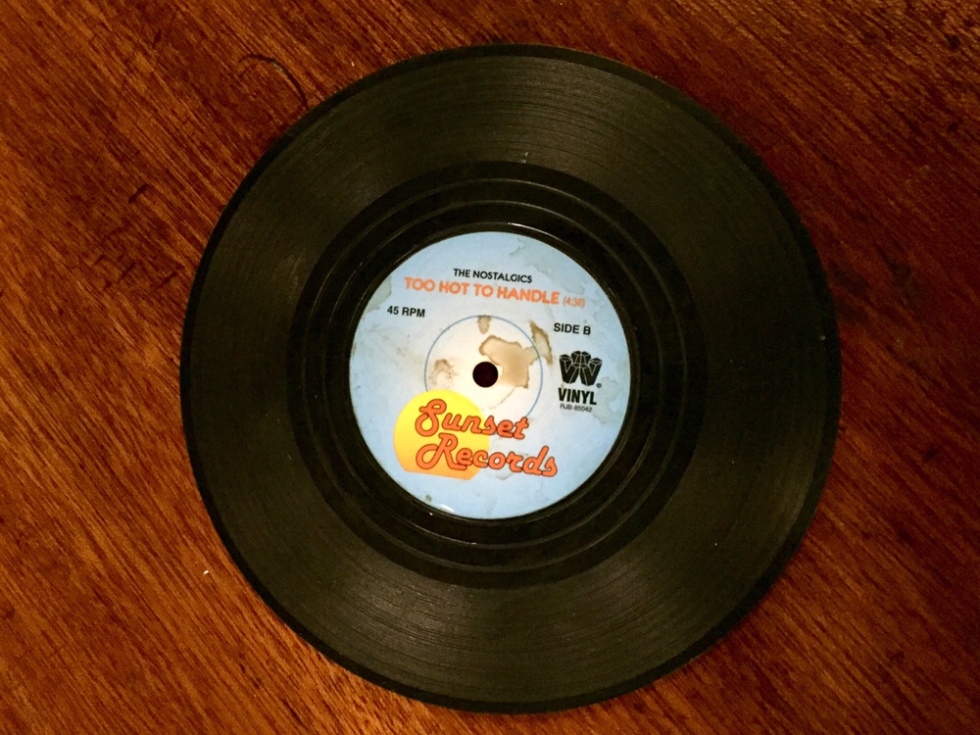 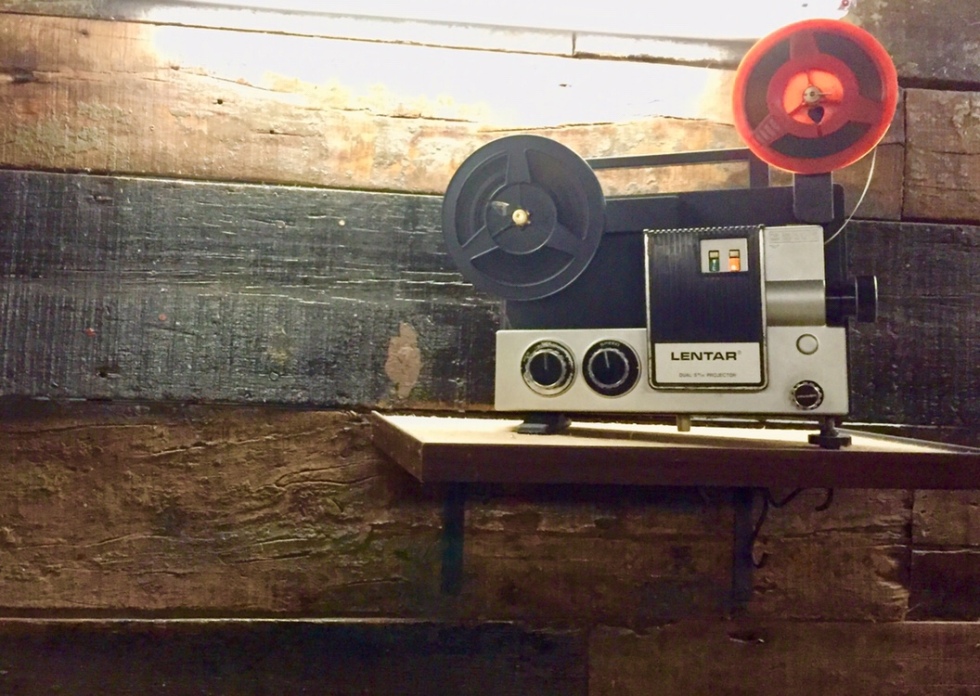 Chef Bitan Upasana Mukherjee had joined The Oberoi Group after completing hotel management from Wayanad, Kerala. Then he moved to Douglas, Wyoming and later to London working with big names in the hotel industry all the while. He returned to India to get married to his love and to be in Kolkata, where his parents were. After a brief stint in the restaurant business in Bijoygarh, he opened Macazzo with another stakeholder in late 2016. The philosophy behind the cafe was providing soul food at affordable prices.

While chatting with him, we had ordered coffee. I am very specific about my coffee. I don’t drink good looking coffee- mocha, latte, cappuccino- designer heart on foam- no, not my world. The darker the knight, the more I lust. At Macazzo, I was enamoured by this Christian Bale of an Americano. A concoction of two kinds of finely ground coffee secretly sourced by the chef. The first sip hit the brain and dopamine blessed my world. It was a robust beauty and the perfect opening for an evening of good food experiences. 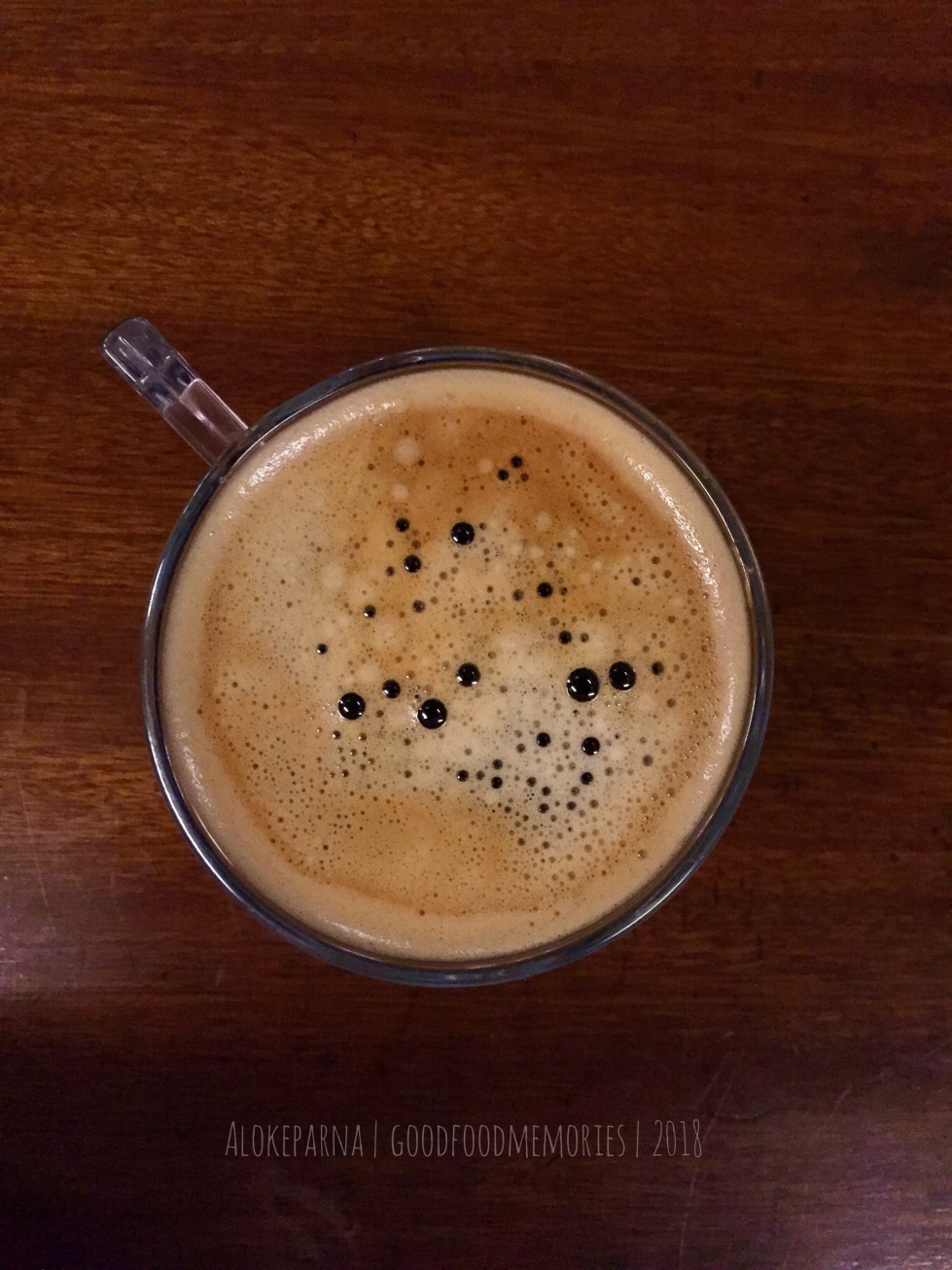 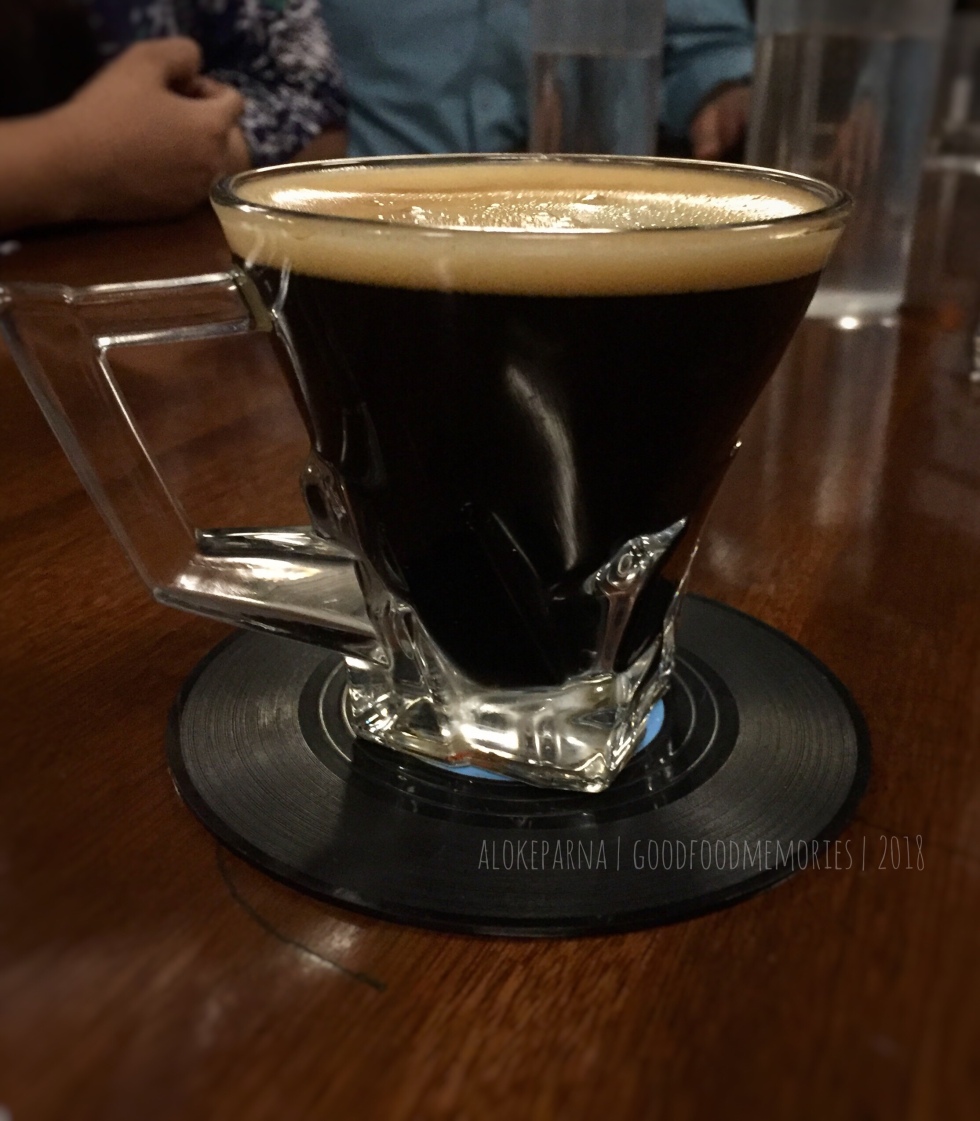 We leaned towards pork while ordering as we were there to taste mainly the newly introduced pork dishes. The extensive menu is any way pork-heavy, although chicken and vegetarian options are there sufficiently. However, Macazzo is deemed as pork lovers’ paradise, and Bitan did mention those were the fastest moving items. Starter, as suggested by Bitan, was pulled pork loaded with bacon, cheese and fries. Very addictive for obvious reasons and hence I indulged a bit more than I wanted to. Thankfully we were sharing and I could control the damage. 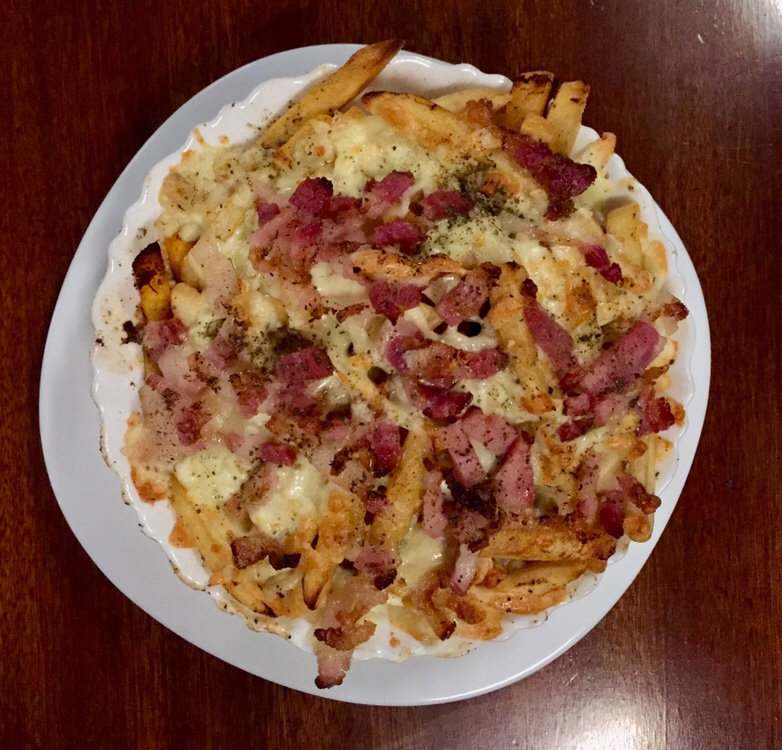 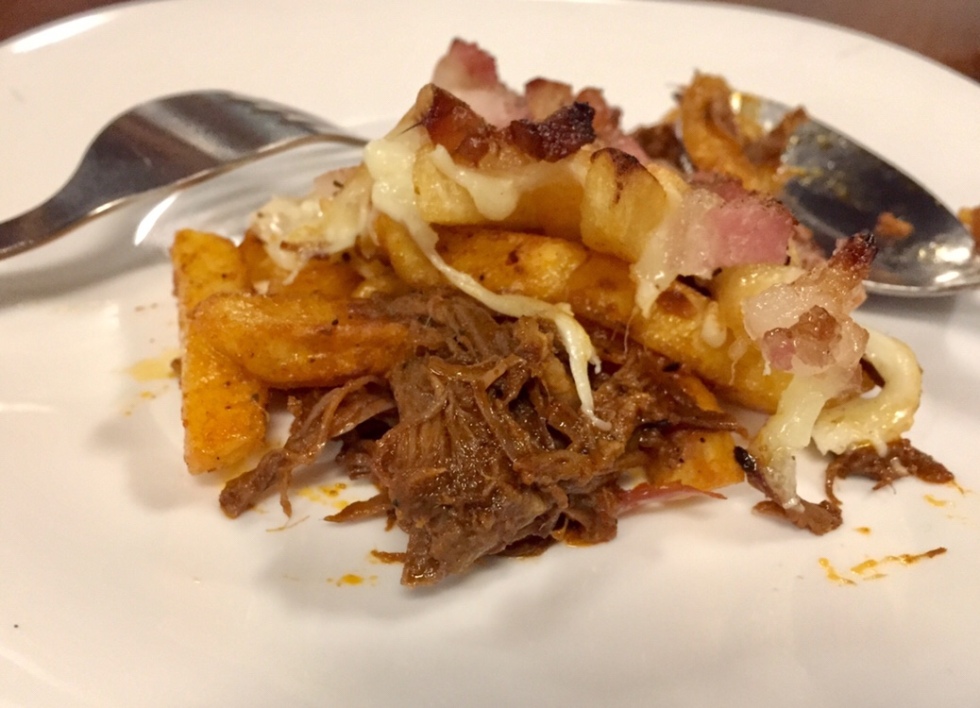 The main course was Gondhoraj Pork Curry and Pork Chops. Those who have worked with Gondhoraj lime, know that it’s not an easy ingredient to work with. A few drops can send most Bengalis into paroxysms of joy while a little excess can leave them with bitter memories. Chef blended the flavours beautifully in his take on yellow Thai curry. Roughly grated Gondhoraj zest cooked with lean pork cubes, coconut milk, Gondhoraj lime juice, lemon grass and Kashmiri red chillis. Liquid Pork fat gave the curry extra boost. Green chillies gave it the desired heat. Embellished with spring onion greens that shined like emeralds on gold. The result was a beautiful blend of eclectic ingredients, teeming with fragrant and delicious flavours and pleasing textures. Bitan calls the dish ‘Gondhoraj Pork Curry’. I call it El Dorado in a bowl. 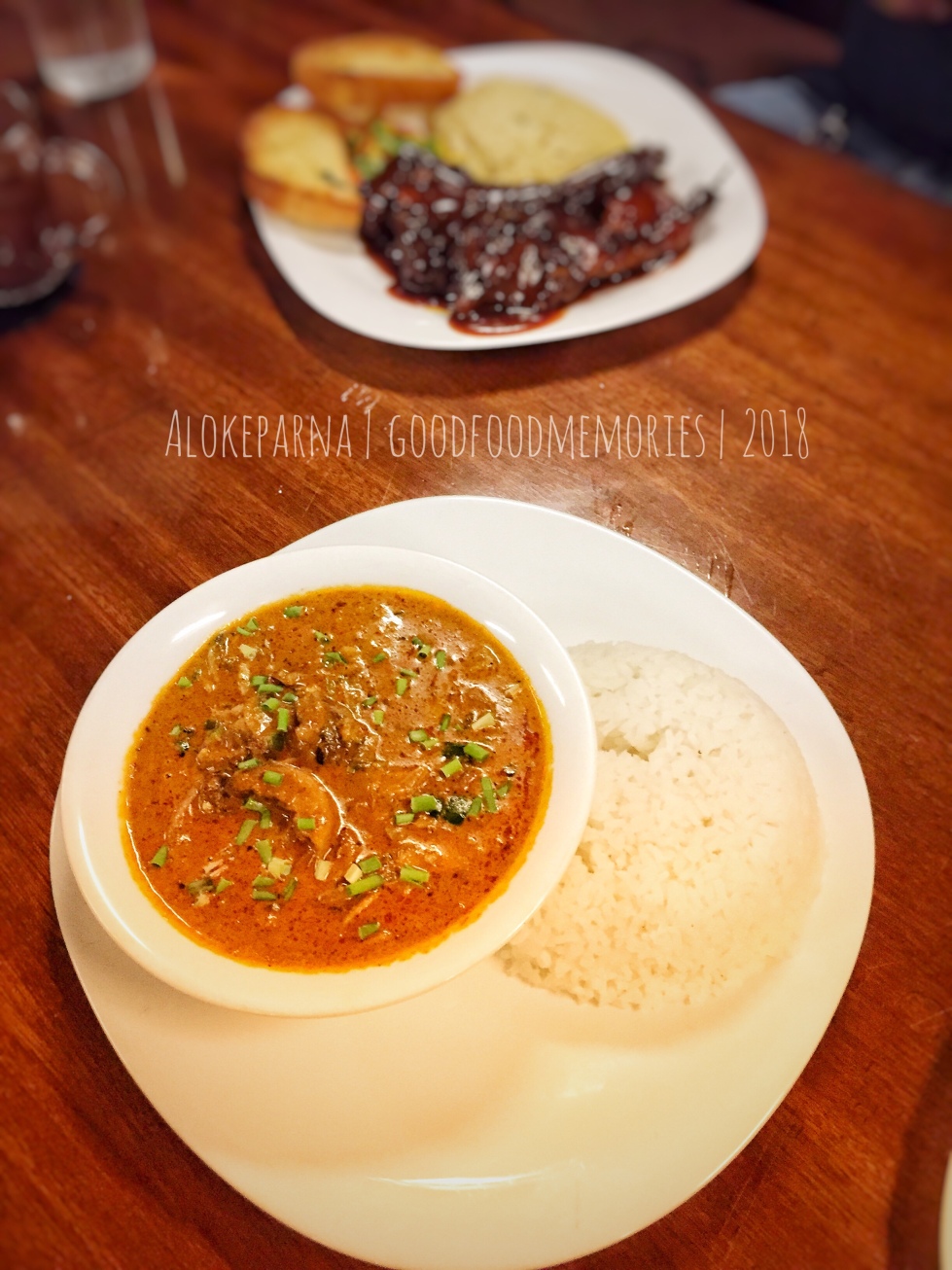 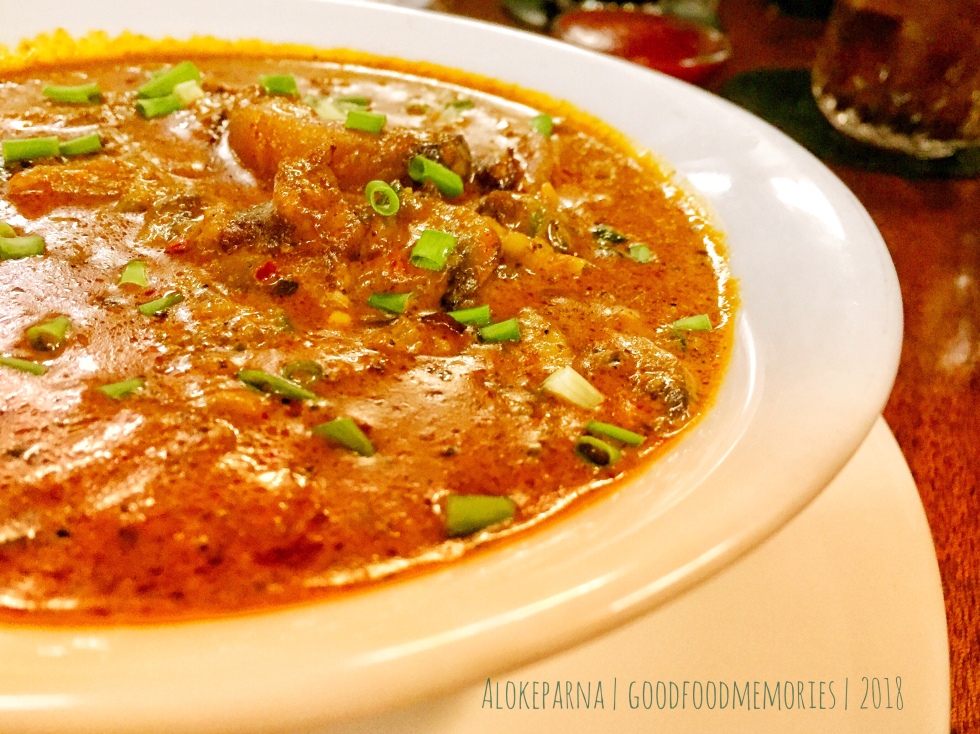 The pork chops came topped with Piri Piri sauce and with sides of creamy potato mash, sautéed veggies and garlic bread. Before you ask, the meat to fat ratio was 70:30 as expected in chops. The house-made Piri Piri sauce that smothered the chops was pleasantly tangy and the heat factor was I guess toned down to suit local palates. I am neither big on steaks and chops, nor an authority. Simple glazed and grilled pork chops where the meat plays the primary role would I guess work better for me. Nevertheless, the dish was flavourful and people-pleaser. 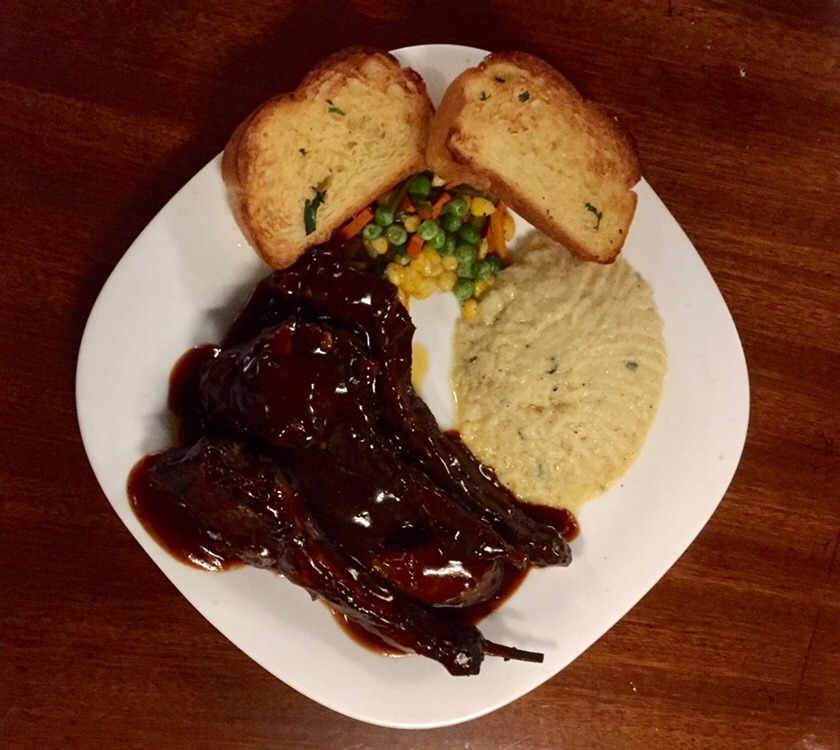 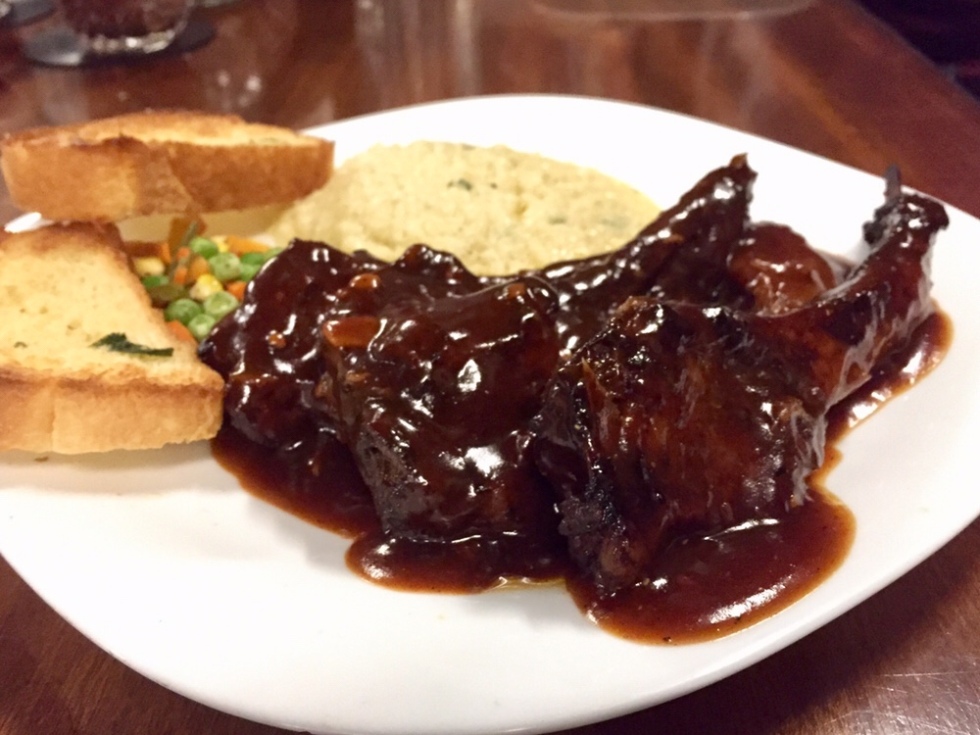 Brownie in Bailey’s Irish Cream was generous in size. The taste, however, failed to excite. A day’s old dense brownie might taste delicious if warmed for 10 seconds in the oven, but did not taste decadent with watered down Bailey’s. 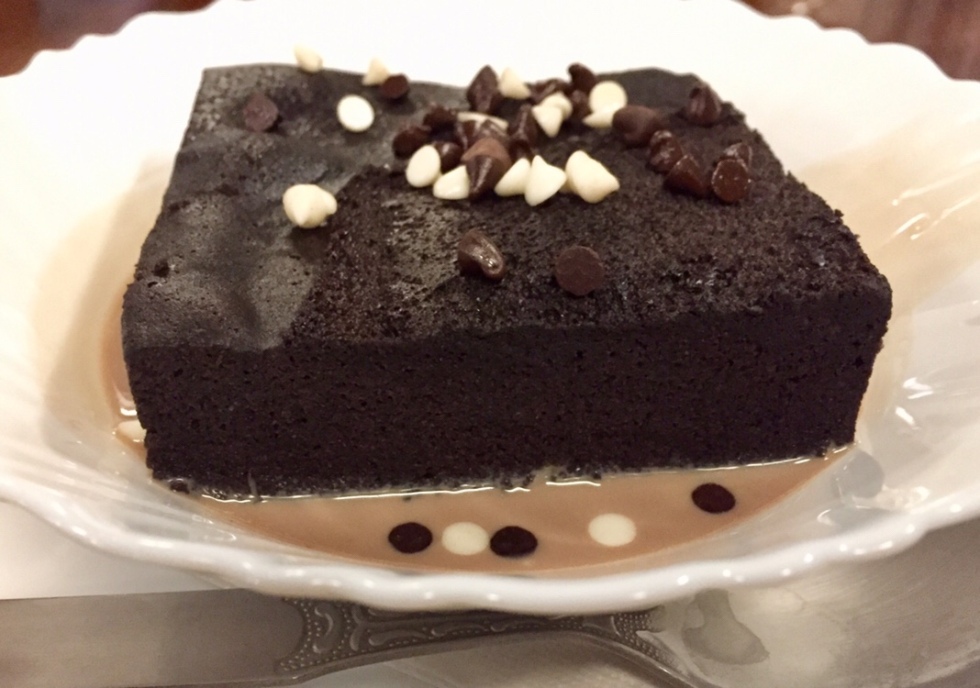 Macazzo would complete two years in September 2018. It came into existence on 22nd September 2016 with just 18 covers and two-page café menu. In my opinion, the kind of growth it achieved without any deliberate external promotion, is quite praiseworthy in today’s food scenario, where every second restaurant is closing down within a year or two’s span. Sustainability depends on quality and consistency and Macazzo managed to stay on top of the game. However, extra caution is needed to arrest even the minor lapses. Of course, it had its share of challenges, mainly in the area of human resources. But Bitan has this rare quality of patience supported with talent, intelligence and listening ears. That combined with great location and meaty menu (literally) with good portions is quite a formula for success. And they say Bengalis are rarely good entrepreneurs!!! Hope Macazzo proves them wrong like some of its forebearers and contemporaries in the industry.

I shall be going back soon for some lasagne. You might wanna make some plans too! 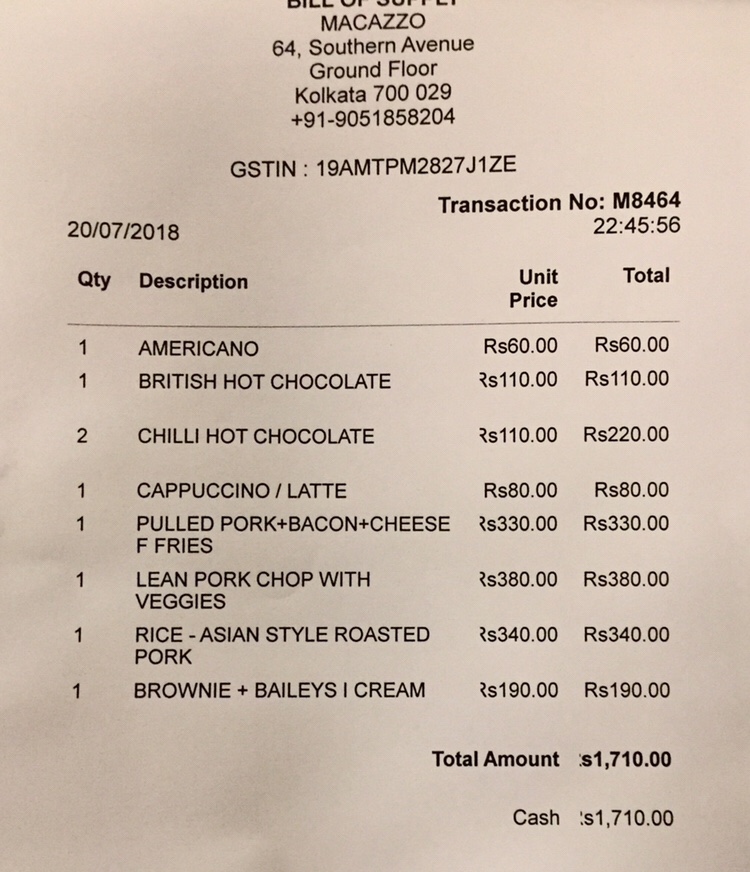