I have rarely come across anyone in the foodie world who doesn’t celebrate good Mughlai cuisine. Me, being no exception. However, I have had more experiences with the regulars like biryani, kebabs and chaaps than the other delicacies this city of Kolkata has to offer. So when fellow food worshippers planned to pay tribute at the temple of Mughlai cuisine — India in Khidderpore, I obviously did a jig (slowly of course, with my AS and all).

In anticipation of a royal breakfast, 6 of us left bed early on a Sunday morning and arrived at India at 7:30 from all corners of the city. It had rained the evening before and the weather was lovely. I had a meditative smile on my face all through the ride that kept my Uber driver frowning. 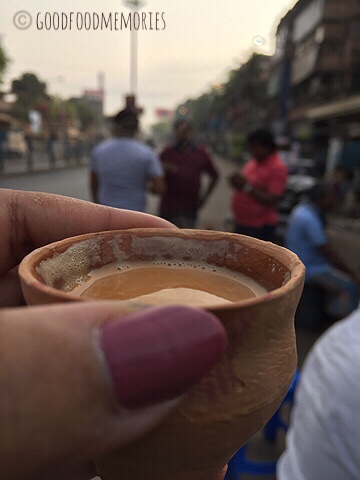 Abhimanyu a.k.a Khaddyoroshik busied the amused server as soon as we settled in a 6 seater table. Ek mutton keema matter, ek mutton stew, ek mutton tamatar stew, ek mutton bhuna, ek daal gosht aur chhai (6) tandoori roti. Well, the menu was pre planned anyway because it was his blog post  that got us planning this exploration. We were in the ground floor non-AC section as the air conditioned section with more refined decors opens close to lunch hours. But I was happy where I was. Clean place, solid furniture, and a chance to eat with the locals, who were obviously regular customers. People who walk in, know what to order and probably that was the reason menu cards were not presented.

The dishes arrived soon and everything was fresh and hot. However, when did any blogger indulged in hot food! Excercising great mind power we took photos of all the dishes. I am not going into the details of every dish because this story is about Daal Gosht . So I will just quickly add that everything was good. Very good, actually. Do check the blogs of my friends (Links given below) where you will find excellent review of all the dishes.

I was intrigued by Daal Gosht. In the other dishes, meat was in full focus and the jus or gravy or other ingredients were just Robin to the Batman. But not Daal Gosht. It was Michelle Pfeiffer (cat woman) demanding every bit of attention and space and was at par with Michael Keaton. While still marvelling at this power couple, my mind kept going back to the awesome Dhansaak I had at Parsee Food Festival a few months back. Dhansaak is a very popular Parsee dish where the meat is cooked with a combination of lentils and vegetables. Though the taste of Daal Gosht was very different from that of Dhansaak, the question in my mind was, how the humble lentils found their way in to a meat dish.

So I set out for enlightenment. Vir Sanghvi is of the opinion that there is probably a hindu muslim divide in using lentils and meat together. Muslims are more inclined towards meat, so most of their dishes have meat as an ingredient. So their daal and vegetables too have meat. As examples, he pointed out that khichda and haleem both have Arabic roots. Same goes for Dhansaak which is a fusion cuisine developed by the migrating Persians who settled in Gujarat coastal regions. Hindus, on the other hand, like to keep vegetarian and non-vegetarian ingredients separate. Though there are a few exceptions. We, Bengali Hindus do have a delectable moong daal preparation using fish head. Some variations of our khichudis too have meat or shrimps.

If we look back further, we see that Mongols (later came to be known as Mughals) were the central Asia Muslim rulers and had nomadic roots. Their cuisine involved cooking with less water and so comprised mainly fire-grilled meat preparations using nuts and dried fruits. Their invasion of India exposed them to lentils and water based stews and a variety of aromatic spices known to the Indians since the Vedic Age. During the long Mughal rule in India, nothing escaped Muslim influence and food was no exception, thus giving birth to Mughlai cuisine which is a hybrid cuisine. The Mughals gradually incorporated various lentils into their meat dishes and most probably Daal Gosht was one such creation.

Daal Gosht is cooked mainly with chana dal. The dish served at India, had chana, arhar (Toor/Pigeon Pea) and probably some masoor too. Masoor was I guess an improvisation that was used to thicken the gravy. Attention was given to maintain the texture and taste of the primary lentils. Regular spices and onion, garlic, ginger were added too. A wholesome dish enjoyed best with thin rotis such as Roomali.

So next time you visit India Restaurant, do try out Daal Gosht or if you have tried already, have it again to see if history adds to the taste. For me it always does J.

Oh and did I mention that the date of our expedition was 1st April, the fool’s day? Abhik did name the group- ‘the Glorious Fools’! The links to their blog posts: