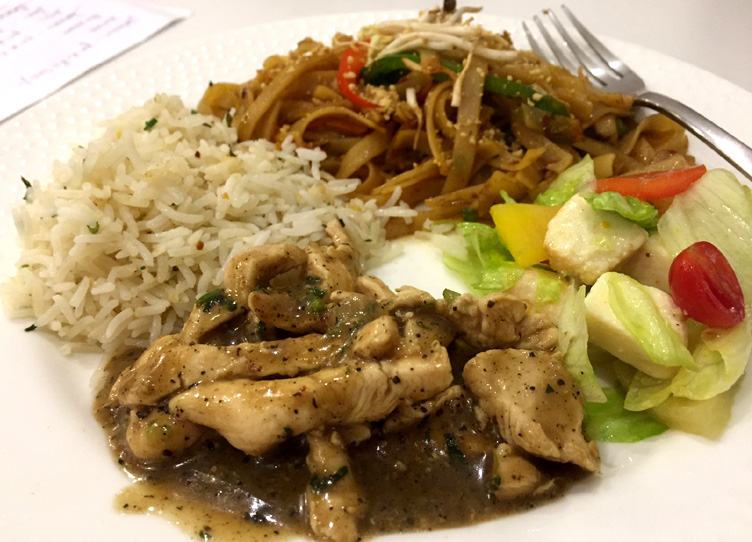 Disclaimer:  This is not a typical restaurant review. This is more of a sharing of a good food experience. I was there to attend a pop-up dinner (paid).

I had always considered southern avenue and adjascent areas as an extension of my para (neighbourhood) due to living in my ancestral house near the Lakes for 34 odd years. Though I have now moved to a different location, the area is still my hunting ground for coffee and food. So when Saloni, a friend, invited me to a pop-dinner to be hosted by The Food Storey, a place I had passed by a couple of times but hadn’t been to yet, I didn’t think twice before saying yes.

I was informed beforehand that the restaurant was on mezzanine floor and this was a bit of a concern for me as I don’t usually do well in low ceiling spaces. Upon arrival, I found that the entrance of the building was well-lit and a red carpet led me to the metal staircase painted in cheerful yellow. I paused at the tiny lobby cum smoking area furnished with a wooden bench, also painted in yellow, and a blue mirror, to marvel at the tasteful décor. It’s not every day you come across aesthetically done interiors in a standalone restaurant. The restaurant itself was a delight, with unmissably European interiors done in pristine white with touches of cerulean blue, olive green and yellow on some furniture and artefacts. The pretty teakwood furniture and the delicate wall plates were a treat to the eyes. Though not a large space, but can comfortably accommodate 30 diners. More importantly, in spite of low ceiling and limited space, one never feels crouched or constrained due to the minimalistic approach while doing up the place. The white provided serenity and peace yet one would feel welcomed as if was visiting somebody’s home. 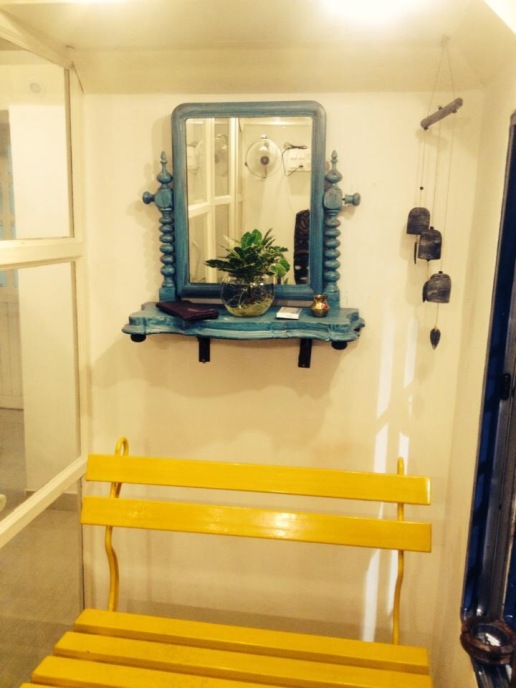 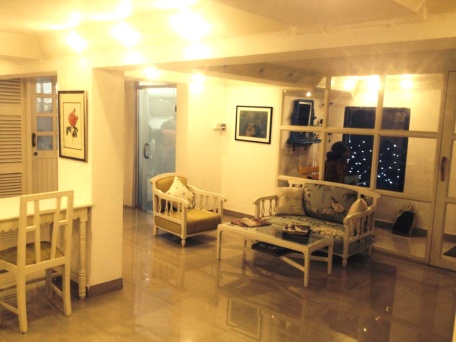 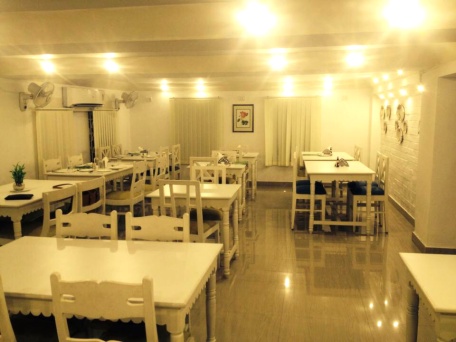 We were told to BYOB (Bring Your Own Bottle) as the restaurant was yet to get a liquor license. Some snacks were arranged too. As we settled with our drinks, I engaged myself in doing what I love the most-to know beyond what meets the eyes. The restaurant is owned and managed by two sisters Sreela Rao and Amrita Roy Chowdhury. Sreela happily satisfied my curiosity. She had a successful career in Air India in sales and marketing and had travelled all over the world. At home, she excelled in cooking Bengali and international cuisine. She always wanted to take her passion one step further and was looking for an opportunity when the Universe had sent her one. An acquaintance informed her about a godown being available on top of a garage. Now, she had no formal training in cooking or a degree in entrepreneurship. But she was determined to give her dreams a shape. Each step was a hurdle, the first being transforming the place into a restaurant. “Madam, you should paint the walls red. All modern restaurants are doing that”- had suggested the interior designing guy. ‘Like hell I will’ had muttered Sreela and had supervised herself all jobs till the place turned in to a fairy tale scene. The final curtain was raised in August, 2016.

Curiosity satiated, now it was time to satiate the tummy. It was a buffet arrangement. I skipped the soup as I always feel full after having soup (though I love soup). The crowning glory was the cheese and spinach salad with honey lemon sauce. They had used lovely soft Kalimpong cheese that melted in to the mouth. The sweetness of light honey and the tangy lemon flavour were a delectable combination. There were cherry tomatoes blushing as they were wooed by coloured bell peppers and cabbage. The spinach was fresh and crunchy. After finishing a second helping, I turned my attention to Pad Thai. It was a vegetarian version. Though shrimps were given a miss, it was otherwise cooked to perfection. The rice noodles were broad and were soft just about enough to contrast the texture of the crunchy bean sprouts and chopped roasted peanuts. The taste- sweet, sour, salty and spicy was luring me for some more. But I resisted and started on the next dishes. The hottie shredded chicken in garlic sauce flirted with flavourful and aromatic herbed rice and the pair was delightful. The dining experience was rounded off with vanilla ice cream topped with nolen gur (liquid date palm jaggery) and garnished with chopped pecan nuts. Very satisfying. 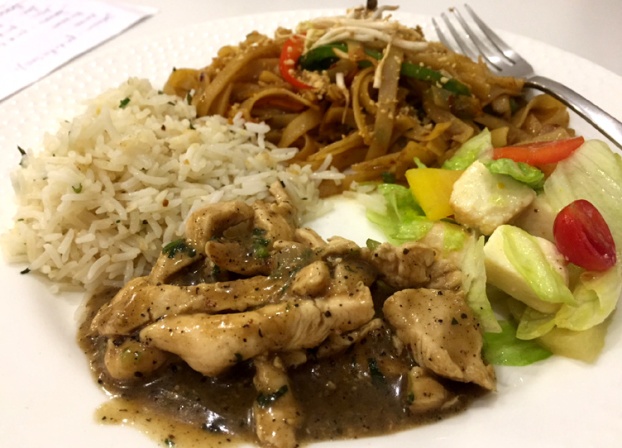 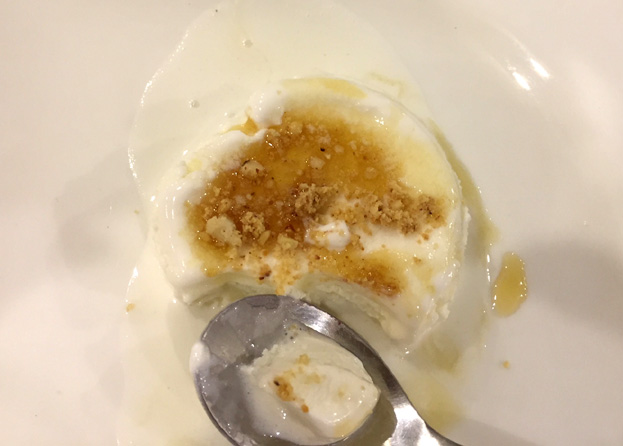 If I needed to sum up, I would say, quaint li’ll place, easily accessible location in a quiet neighbourhood, great artsy décor, no fuss, reasonably spread out seating, good clean food with fresh ingredients and very hospitable staff. And all of this comes at a very moderate price. Plenty of car parking space available right in front of the restaurant. Definitely worth repeat visits. 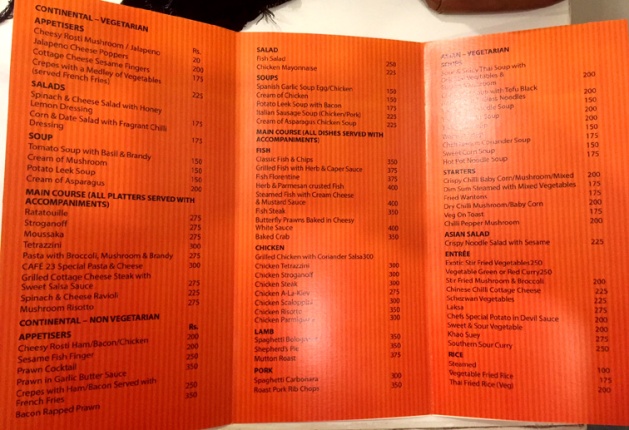